Book Review: Focus – A Simplicity Manifesto in the Age of Distraction by Leo Babauta 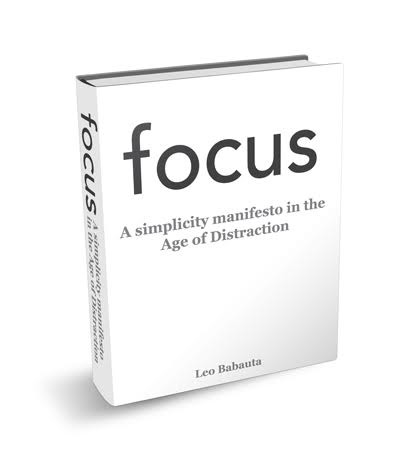 This is the opening quote of the eBook “Focus, A Simplicity Manifesto in the Age of Distraction” by Leo Babauta. He is better known as the man behind the hugely successful blog zenhabits featured twice on the list of top 25 blogs by TIME magazine. Here he regularly shares his learning, thoughts and things that make up his world – a consciously designed and simplified one.

Leo Babauta introduces himself as a regular guy – a father of six kids, a husband and writer. He loves to eat vegan food, write, run and read. Among other things, he is the creator of other “The Power of Less” – an Amazon best-seller, “Write To Done” – dedicated to writers and bloggers (which he does not own anymore) and minimalist– where he writes about minimalism and owns a business. He has uncopyrighted the content on “Zen to Done” and zenhabits. (You can read more about his interesting theory and views on this via zenhabits).

Babauta has quit smoking, lost weight, got out of debt and more. A look at the whole bunch of personal and professional accomplishments since he decided to take charge or his life December 2005 would perhaps leave one wondering- “How did he accomplish so much? And more importantly, how does he sustain it?”Though it seems like a long list, he adds that he was able to do so only by taking is slow and easy – one step at a time.

He says he has no claims to perfection, but he tries every single day. Fails. And then, tries some more. He is happy to have taken “the journey with no destination”.

“What’s the similarity between Whatsapp and diapers? You have to keep checking even if there is nothing!”

~ A forwarded WhatsApp message (There you go!)

Well, for some, this could seem pretty lame a comparison. But think about it. How often were you tempted to glance away from reading this review? How frequently do you check your email, respond to Facebook messages, post on twitter handles or engage in other social media on any given day (or night)? Perhaps you turn to answer the pings and rings on other gadgets? Is it an addiction disguised as a necessity to keep pace with the modern life?What does the entire buzz around connectivity mean for you? And more importantly, why does it seem so vital? Without you being always connected, would the world crumble?

As Leo sees it, there is only one way to know. Test it out. And be honest with your findings, says he. If you are finding yourself overwhelmed by distractions, by life – be it through technology, co-workers, friends, kids and then some Elementary, my dear reader?

However, for starters, Babauta does ask his readers to step back and take a good look at what takes up their time. While some distractions are necessary because among other valid reasons he points out, our minds do need a break and a fair dose of fun. But which are the ones that feed your abilities well, allow you to create, live fully and wholly instead of mindlessly consuming.

It can prove to be inspiring and boost you on a personal and professional level – as individuals or as employers, managers, and bosses – as a society moving forward with a larger intent, to effect positive changes in the age of information…err, the age of distraction.

“Do as I say, not as I do.” Quite the opposite, here Leo Babauta lives the life he propounds. And leads by example – a good one at that.

For example, while he says he is as good with technology as the next person, he beautifully illustrates himself being pro-technology too by listing apps that help you with digital distraction (those who work with PCs – hint, hint). While a vast majority of them like Writeroom are helpful for those who read on the web or use a computer to write, he does include a small set of gems like Stayfocussed, Freedom and Megaroom as goto apps that can help a reader working on other things as well. Again, it is not meant to be comprehensive one but more so as the ones that worked for him.

He also includes insights dedicated to:

So, while he includes a couple of pitches for the book, his way of life and spreading the idea in many sections of the book, he also ensures that there is a bit of something that can help just about everybody in one way or the other.

Through focus, Leo Babauta places the facts about the age we live in, from fast food to inactivity. Discussing the offshoots of the lifestyle, which has become a mainstay of a majority of people in recent times and one that we unquestioningly live, he also delves into solutions for them.

While one would think otherwise about people who create and so need to focus. Extending the definition, Leo includes a whole list of people who may not really consider themselves as the typical “creative types”. But they definitely could benefit by bringing in focus – on a task, on a project or a person – reap the fruits of solitude and undivided attention, personally and professionally.

Just as a good friend or mentor would, Leo not only highlights the problems but offers constructive thoughts, shares personal notes and approaches on how the reader can usher in positive changes in their own lives. His trademark conversational tone adds to the appeal of the wisdom held within the pages. Interspersed quotes – profound, apt and meaningful ones set the context of each section. Freely used lists make for an easy read of the suggestions and points too.

The entire work is but a small compilation of his learning. Presented in an easy-to- read and consume format and exuding one the philosophy of minimalism, the eBook is well-structured, simple and concise. Just as he says it is meant to be, at the outset. Free and full versions, any will get you going

While the free version is a nice little book capturing pearls of wisdom, the full version includes:

He gives a freehand for all his readers to share both the free version and the full-version. Finding your space to create – deliberately Heralding a new approach to being productive, embracing simplicity and finding peace in a world filled with chaos and confusion, Babauta shares  can help you churn out quality work, redesign your life to a more balanced version, mindfully. No drastic changes, mind you. Just small baby steps. Urging you to explore and reap the benefits as he has, he puts forth the key to all of these and more in your hand– focus.

Babauta, Leo, “Focus: A Simplicity Manifesto in the Age of Distraction,” (self-published), 2011