Every Day is A New Start 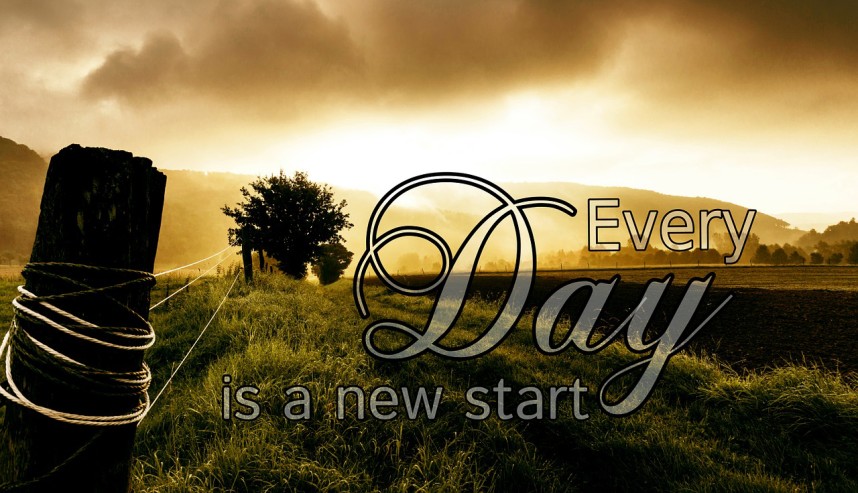 Recently, Darren Rowse of Problogger, shared an interesting concept on Periscope called Micro-ambition. A lot of people think too far ahead and don’t focus on the present. In my own life, I’ve seen that it makes more sense for me to focus on one day at a time rather than look too far ahead.

Yes, I do have long term goals, some of them are 12 to 15 months ahead, and others are 10 year goals. I like the vision and purpose behind my long term goals. They give direction to what I do today. But they also make me lazy. Since it’s too far ahead, I tend to relax and not think about it till I’m close to my deadline.

I like breaking up my long term goals into small chunks of daily goals. I loved Darren’s video on periscope that spoke about micro-ambition. What is your ambition for the day?

I see too many couples worrying about their future together rather than enjoying their present.

Mark Twain said, “My biggest problems never happened.” By looking too far into the future, we worry about things that are never going to happen.

Not so long ago, I spoke to a young employee of mine who did not seem to have any ambition or goals. I asked her, “Where do you see yourself 5 years from now?” Her answer was “I haven’t thought about it.”

I then asked her, “What are your career goals?” The answer was “Right now, I just want a job. That’s it.” I realize that not everybody is ambitious or sees too far ahead.

I believe that living in the moment is a gift.

However, it’s important to have a goal for the day. It keeps you focused and helps you learn new things. Your goal for the day could be to connect with 5 people, or make a sale of $xx. I like the focus that goals bring to my day. But there are also times where I like to take a break, and think about the little joys of life without worrying about goals or ambitions.

Life is about making those little starts

I like the word micro-ambition; it helps you make those little starts. If your big dream is to win Wimbledon, your micro-ambition could be to hit the ball across the net today, without worrying about matching that Djokovic serve.

I see a lot of friends of mine who are successful in their respective professions but fail to embrace social media, video, or even podcasting because they want to start right at the top. It’s about making a start, your first video isn’t going to brilliant, just like your first day swimming or playing football. You’re going to suck at it initially. But if you make a start, do it repeatedly, and over a period of time, you’ll be much better.

Bruce Lee said, “It’s NOT about practicing a thousand kicks once, but practicing one kick a thousand times.” So what does this mean to entrepreneurs, “It means if you practice something long enough, you’ll eventually become good at it.”

It’s a journey like a farmer sowing a seed, raising it into a plant, then a tree, and eventually reaping the fruits of his labor.  Learning and acquiring a skill is very similar. You put in consistent, deliberate effort every single day and one day you’ll begin to wonder – how did I get so good?

As someone told me very early in my life, “Life is not a destination. It’s a journey.” It’s time for us to embrace this journey, take one day at a time, and explore the destiny nature has scripted for us.

PrevPrevious ArticleAdvantages of Mobile Phones
Next ArticleHow to make your website into a lead generation magnet?Next