Seth Fiegerman’s recent article on mashable talks about Google Plus’s long, painful, and expensive experiment to unseat Facebook. Whenever a company loses its values, and starts doing something just to unseat its competitor, it usually backfires and comes back to haunt the company. A lot like running a marathon, looking back only slows you down.

Steve Jobs said, “marketing is about values.” And that’s been one of Apple’s biggest success mantras.

What is Google’s mission?

Organize the entire world’s information in one place. Does G+ do that? The answer is a big f***** NO.

If G+ has to revive, and get a piece of the social media cake while still living its values, what does it need to do?

In my view, it needs to organize the entire world’s social conversations in one place. Certain reports claim that over 27 million pieces of content is shared on social networks every single day. How can we keep track of this information especially if we are on multiple networks? Businesses track this by using tools like Hootsuite and several others. How about social network users?

Here’s a strategy to transform G+ into a search engine for social conversations.

2. Blogspot right now is an independent platform, G+ has an opportunity to organize the blogosphere in one place. The plus interface should have a place where users can see rss feeds of blogs they have subscribed to. There should be a feature where articles can be shared, and comments can be posted without leaving Google Plus. Even a ‘suggested blogs’ feature should work well.

2.1 A comments platform like disqus, that can have all your blog comments in one place. G+ comments can be an alternate option to disqus. Again this is all managed on the G+ platform.

A rough wireframe of what is possible is below. A good UX designer should be able to polish it and come out with a clean design. There are far greater possibilities with G+.

If Google wants to pick my brain, they can hire me for a few thousand dollars an hour. Larry and Sergey, do you hear me? 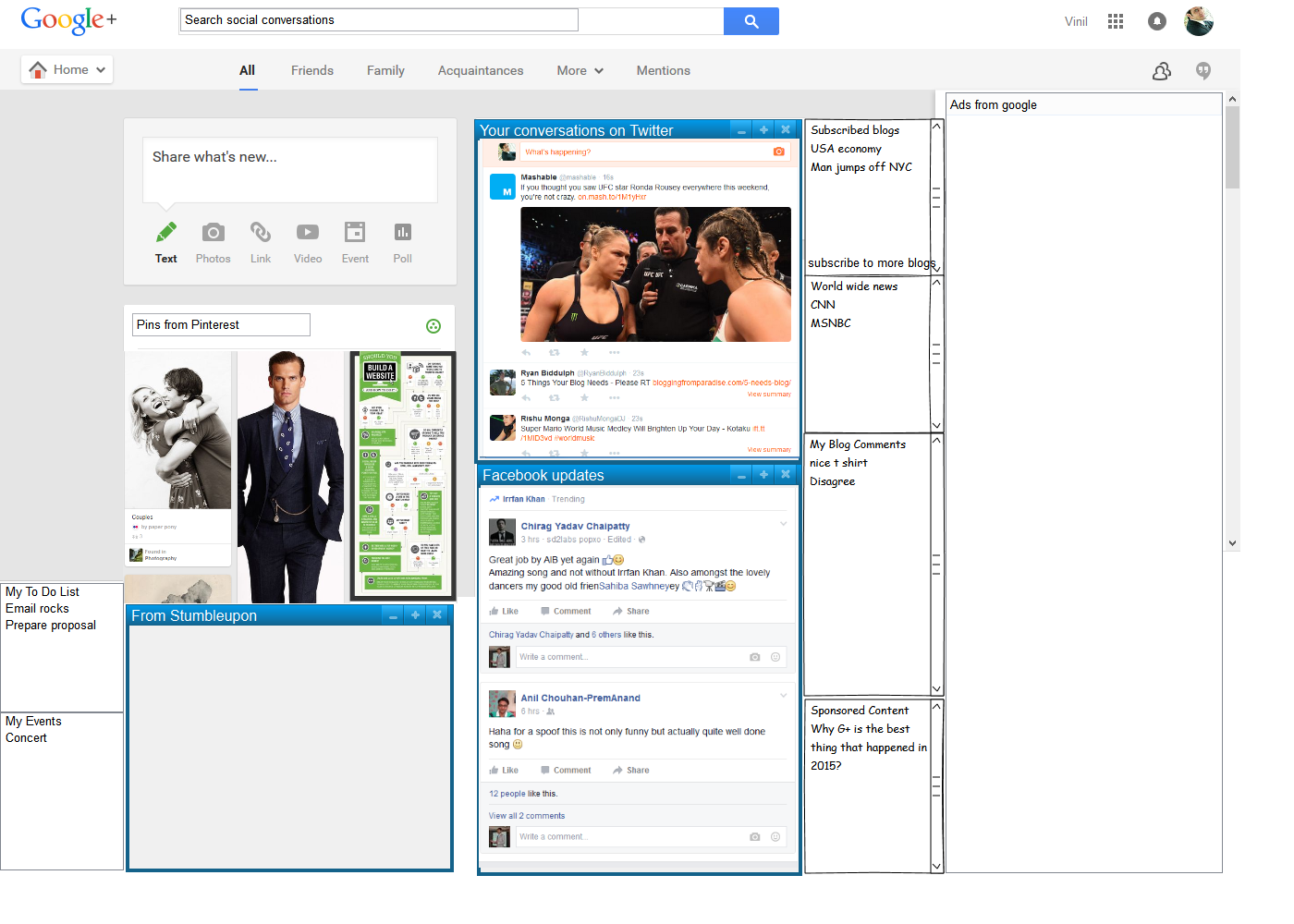 Google Hangouts are a gold mine for anyone who wants to create great video content that can be leveraged on YouTube, social media, and email. Video marketing is the future, and Google Hangouts allows a great opportunity to create optimized content.

I love how G+ provides marketers and business owners a platform to connect and engage with like-minded people. G+ combines the best features of Facebook, Twitter, and Tumblr to create a unique user experience. However, the best part of G+ for me are the Communities. Join relevant communities related to your niche and network with people there and share your content. I have experienced increased online visibility by sharing my latest blog posts there, as well as sharing other posts of users. But arguably the best thing about G+? No ads!

While I never officially became a fan of Google Plus, I did see it as undervalued, mostly because Google Plus decided to do what Facebook had already done, instead of trying to do their own thing. What I like most about it is the Author feature. I can look at what websites I contributed to because they have my rel=”author” on them.

Q. What do you dislike about Google Plus?

I dislike the preconceived notion about G+ being a “referral graveyard site” or  “The Walking Dead of social media.” It is a great tool when used correctly, but it doesn’t help that people dismiss the site because their friends aren’t there or they are not getting the traction that they expect for their business. It paints a poor portrait of G+ that lots of people share. But in my experience, if they just give the tool a chance, there’s good to be found there.

Finding communities is difficult.  It shouldn’t take what seems like five clicks to find the G+ community.  I wish that there was the opportunity to use a vanity url for the communities so that it would be easier to find.  What I did was create a domain and sub-domain redirects so that I could give that to people and it would take them directly to the community(ies).

I dislike the fact that Google Plus had attempted to become the next Facebook and even replace it, when Facebook was already established. Sometimes it is best to leave companies to do what they do best. Google for searching, Facebook for friends, Twitter for streaming business, etc. When you try to become the be-all end-all company, you are just taking on too much. Pick a specialization and focus on that. It will make you the best in what you do.

Q. Your top 2 suggestions to improve Google plus?

Bring back the “rel=author” feature. Getting this back (where search results which show the profile picture of people who created the page) allows bloggers to build and develop their profile by being able to feature their works from different sites on the G+ profile. The other suggestion is to find a way to get more people on board with Google+. I think the lack of updates about G+ status as a social media site has hurt its stock a lot.

I actually wrote about the same topic as this interview, here on DirJournal.com.  There were some interesting responses on the predictions of Google’s longevity.   As for my opinion, improve the URL and allow for vanity urls and the other would be to quit dropping services so soon.  For example, the youtube collections lasted what, two weeks?  I understand that services (especially since they are free) are cancelled and discontinued, but I would hope that Google could test (i.e. a group of beta testers) and not announce something that is cancelled two weeks later.  Two weeks is too short to be “launched.”  Then, again, maybe I was a beta tester and I didn’t know I was that special. lol

Most of the people at Google see Google Plus as a failure because they are still focused on the fact that it failed to replace Facebook, rather than understanding what Google Plus could be, they are focused on what it should have been. Google Plus could have been an amazing tool for tracking your Authorship around the Internet and display the articles you have written plus all the articles you are interested in. There is no more Google Reader, as they did away with that, so why not become a content curator as well? Google Plus still has so much potential, but it will continue to fail so long as it continues to think that it needs to be like Facebook, when really, it doesn’t. It needs to figure out what the next best thing for its users are, and that is: Google Authorship and a personal Google profile.